In 1917, Piramo Ricci, the great grandfather of the current owner, together with his brother Salimbeni Ricci, started a public transportation company for people and postal services (the well-known post cars) with coaches pulled by horses travelling from the countryside south of Siena to the city centre. The local authorities granted legal authorisation for this activity. Other recently discovered documents, dating back to 1920, show that even at that time such operations were already being conducted - in this particular case the Ricci brothers sought public funds due to low profits.

At the beginning of the 1920s horses were replaced by the first engine-powered vehicles, and in 1925 the first lorry was bought. It had wooden benches for transporting people.
In 1930, the eldest son of Piramo, Radames Ricci, founded the company "Autolinee Fratelli Ricci" with a donation from his father in the sum of 10,000 Lira, the only clause being that the other three younger brothers - Romolo, Vito and the newborn Giuliano - would have to be involved in the business. This is how the purchase of the first coaches was funded, again to carry out the public service of transporting postal services and people.

This continued until 1940, when Second World War began, and which had a significant impact on the Ricci family. Romolo had to leave for Albania and the then Yugoslavia, to serve in the army as a driver at Army Command Headquarters; the other brother Vito, began a clandestine life as he did not share the political ideals of Fascism. Radames was also called to serve in the army at various different barracks in Italy. When German troops invaded Italy, further problems ensued - in 1943, 8 buses were requisitioned. 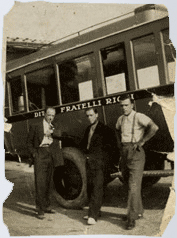 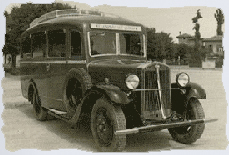 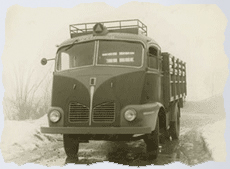 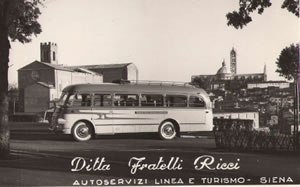 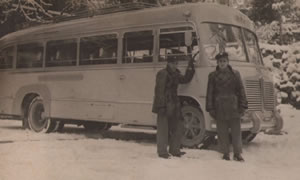 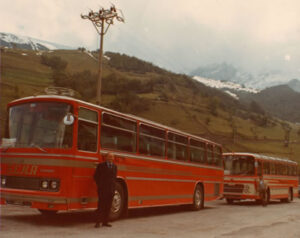 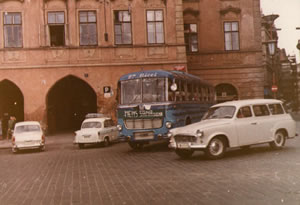 At the end of the war, and when all brothers came back home, the company continued its usual operations. But it lacked vehicles and the money to buy new ones. The American troops had left behind a lorry that had been burned out; so the Ricci brothers did not hesitate and took it to repair it and to use it for transporting people. And that's what they did. In 1946, the number of lorries used for transporting people was increased to 2.

This situation continued until 1948, when rumours started that in Assisi, the Madonna della Porziuncola was moving and was showing signs of life. People in Siena started to look for means of transport to go and see this "miracle" - which was later found to be an optical illusion. Clearly this journey could not be made using lorries. So, Radames and Romolo ordered a new bus from a prestigious and famous brand at that time, Isotta Fraschini. It was a beautiful 35-seater bus built by the Orlandi body shop in Modena. And so the bus started making its journeys.

This was also the beginning of a rudimentary but effective form of tourist bus rental. Linda, Radames' wife, who was a teacher at a primary school, stayed home to take reservations, and to support customers, while the four brothers continued travelling around. In those days everything was starting up again after the war, but it was also a harsh period in Italian history characterised by poverty and struggling to rebuild - just to work and put food on the table, the family slept only two or three hours per night, sometimes never leaving the bus. Later, other vehicles were bought and, at the same time, the needs and the requests of our customers grew.


In 1952, the first journeys abroad started, mainly Paris, Vienna, and the whole of Switzerland. In 1968, the family business grew with the acquisition of S.E.N.A., a local tourist transportation company. The euphoria and business growth were stopped by the Italian government, which founded public transport companies and forced almost all small businesses working in the transportation of people to relinquish their lines to the aforementioned public companies. So in 1973, the lines owned by "Autolinee F.lli Ricci" became "public" and the company was dissolved. Undeterred, the family continued with tourism travel, with increasing success, which reached its peak during the mid 1980s, when the number of coaches held by the company was 12.

The work with tourists kept going with "Balzana Autonoleggi", a small car hire company with drivers, and through contacts with some previous foreign customers.

In 1999, Renzo saw the opportunity (and had the dream) of going back to the old family business (and the business he felt passionate about) with 2 new bus registrations, which had been won in the Municipality of Murlo. Together with his son Stefano, the current company manager, he decided to pick up where he had left off just a few years previously. In August 2000, Renzo, Giulia, and Stefano Ricci founded "Ricci Autonoleggi sas".

Today the operations continue with great success, thanks to the commitment shown by the new generations of the Ricci family. The collaboration with Mercedes also continues, as the main supplier of our vehicles, which are always at the cutting edge and in perfect maintenance condition. Ricci Autonoleggi works with some of the most important and prestigious tour operators in the world, with our modern, comfortable vehicles. Our staff, who are a huge asset to the company, are always available and has able to meet any client need.

Call Now Button
We use cookies on our website to give you the most relevant experience by remembering your preferences and repeat visits. By clicking “Accept”, you consent to the use of ALL the cookies.
Cookie settingsACCEPT
Manage consent

Any cookies that may not be particularly necessary for the website to function and is used specifically to collect user personal data via analytics, ads, other embedded contents are termed as non-necessary cookies. It is mandatory to procure user consent prior to running these cookies on your website.